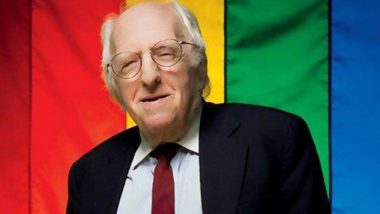 Kameny advocated for gay rights for nearly half a century. He paved the way for many bills and reforms to be introduced and passed by the law in support of the LGBTQ community. Let’s learn more about the activist who is widely revered in the LGBTQ community.

Frank Kameny served in the U.S. Army during World War II. He returned home and graduated with a baccalaureate in physics in 1948 and completed a doctorate in astronomy at Harvard in 1956 before obtaining a government job in 1957.

But shortly after being hired as an astronomer for the Army Map Service, Kameny was fired for being a homosexual in 1958 and was also prohibited from working for the federal government.

This was due to the Lavender Scare that swept through the united states from the late 1940s to the ’60s. During that time, the term “lavender lads,” was used by politicians to refer to gay men in the State Department. Thousands of federal employees were fired or forced to resign bs because they were thought to be gay.

However, Kameny did not take this injustice lying down. He decided to fight back. In a 1960 lawsuit, Kameny sued the government. The lawsuit reached the supreme court but did not garner a win for Kameny.

The lawsuit is widely regarded as the first civil rights claim on sexual orientation. Undeterred by the loss, he co-founded the earliest LGBTQ advocacy groups called the Mattachine Society of Washington in 1961.

He is also known to hold the first gay rights demonstration outside the White House in 1965. He then took on the American Psychiatric Association and its classification of homosexuality as a mental disorder.

In 1971 he ran for in the District of Columbia’s first election for a non-voting Congressional delegate and became the first gay candidate in the US Congress.

Kameny dedicated his entire life to lobbying for equal rights for the LGBTQ community. He even received an apology from the U.S government in 2009 for his unfair dismissal from the federal government in 1958. Frank Kameny died at the age of 86 on October 11, 2011.