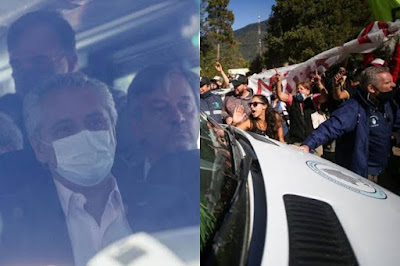 Dozens of protesters kicked and threw rocks at a minibus carrying Argentine President Alberto Fernandez on Saturday as he visited an area devastated by forest fires, TV footage showed.

As he left a community center in the town of Lago Puelo in the southern Patagonia region, Fernandez had to take refuge behind a wall of people as a crowd of demonstrators pushed toward him and his delegation.

The protesters later stopped the bus carrying the president, punching and kicking it and throwing stones that broke windows in the vehicle, according to footage broadcast by the TN network and the newspaper Clarin.