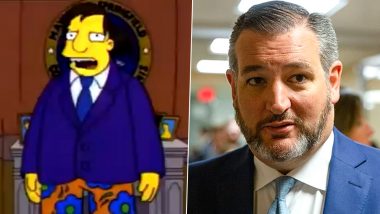 The Simpsons and its predictions, are wild running rings around Nostradamus. Many episodes, photos and short clips have surfaced on social media showing how the American animated sitcom predicted certain events in real life. Be it the pandemic, or former Donald Trump’s US presidency, or Vice President Kamala Harris’ inauguration outfit ; the show has got many things right, which makes it so creepy! Now, it appears.

The Simpsons may just have predicted something very relatable to the ongoing scenario in the United States. A decades-old scene is going viral on social media, resembling the US senator Ted Cruz’s recent Cancun trip amid historic snow and ice storms this month in Texas.

For over three decades, the series has thrived with a dedicated audience invested in the hijinks of Homer, Marge, Bart, Lisa and Maggie. Despite many of its storylines, they end up getting mimicked in real life later on . Recently, Cruz viewed as a presidential hopeful in 2024, faced condemnation after pictures surfacing on the internet showed him in an airport line, in a passenger lounge, abroad an airliner and leaving Cancun International Airport Mexico.

Cruz’s decision to travel was criticised, with millions of Texans grappling with the fallout from a ferocious winter storm